When Soccer Sisters was launched, I had to find the name of a main character for Out of Bounds. I had already used my daughter, Lily, in Breakaway, so was searching for some inspiration.

It didn’t take me long. For many years, I was the head coach of a team called the Roadrunners, a great travel team that got recruited to be a part of NY Rush. That team was so amazing and super talented! We made it to the Finals of the NY Cup (lost in PK’s!) and were Champions of many tournaments, including the Delco Cup.

But most special to me were the girls and the parents. Every last one of them was dedicated and just so much fun. All of them, amazing people. There was one girl who came to our team a little later, Makena Ward. She started as a guest player – and would say yes to any invitation to play. Makena is not only talented, she is also fierce and clutch! I loved coaching her. Unfortunately, when the age changes came a few years ago, our team could not stay together. We were split down the middle with some girls born in 03 moving to the older age group.

Our last game together ended up being the championship match at a big tournament called Delco. We were outmatched for size by a great team from Syracuse. Thunderstorms forced us to play the finals inside! It was all a little crazy. We hadn’t had many chances in the game until the final three minutes when Abby, one of our original Roadrunners, who I had coached since she was 8, got the ball and made a perfect pass to Makena. Makena hit her shot left-footed and beat the keeper. GOAL! 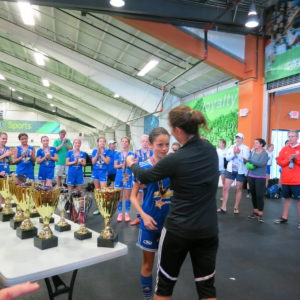 The other team was stunned, the coach just shook his head. We all went crazy. But, the game wasn’t over yet. They pounded us for the final three minutes! Finally, the whistle blew.

It was fairy-tale ending that I could not have written. People always ask me if I am writing about myself in my books, and I say, yes, there is a part of me in the characters. But, so many of the friendships and moments were inspired by amazing kids like Makena and my daughter, Lily, Kiki, Lauren, Milly, Megan, Ariana, Ana, Olivia and all of my awesome players. When was writing Out of Bounds, I was looking for an Irish name, and I loved the original spelling, Makena. She and her parents allowed me to use it. I miss coaching those kids, but am so happy to see so many of them continue to love soccer.

Thank you Makena for your love of the game and lovely name.

Love soccer? We do too! Connect with Soccer Sisters
for news, events and sharing the beautiful game.